At this point, Walter was still working for FMC in a consulting capacity, but he’d been out for awhile on sick leave after a cancer diagnosis. Remember those cigars he’s always smoking in photos? 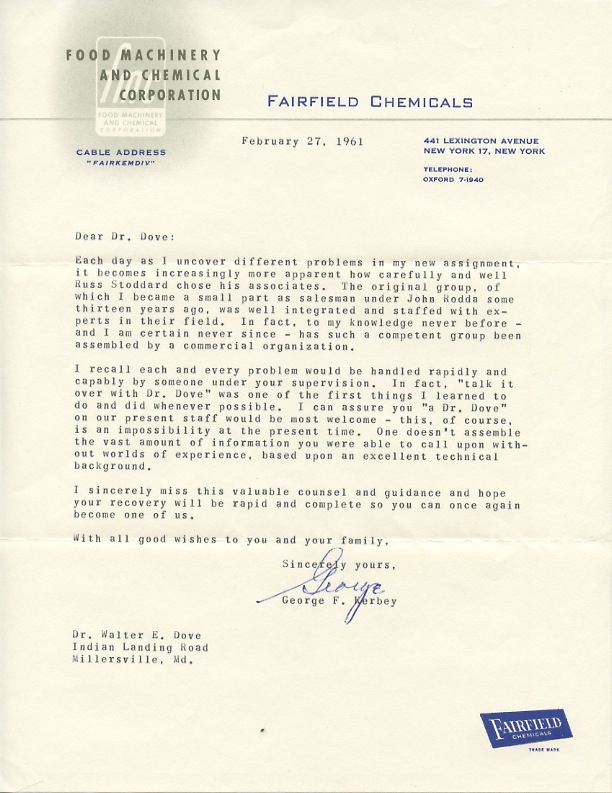 At your recent meeting with Dr. Gates and others at Middleport, it is my understanding that Dr. Gates requested a letter on the Hollingshead rodent repellent IB-120. This letter is intended for that purpose and for other uses in the company if it is so desired. 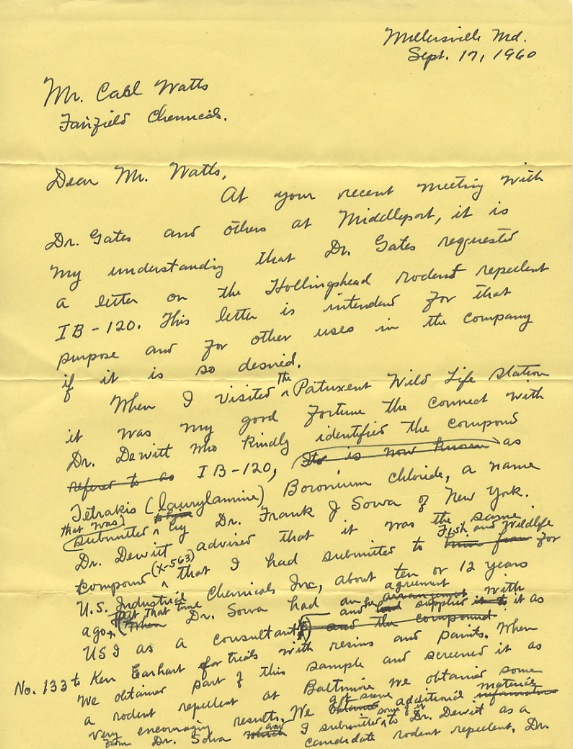 When I visited the Patuxent Wild Life Station it was my good fortune to connect with Dr. Dewitt who kindly identified the compound IB-120 as Tetrakis (laurylamine) Boronium Chloride, a name that was submitted by Dr. Frank J. Sowa of New York. Dr. Dewitt advised that it was the same comound (X-563) that I had submitted to Fish and Wildlife for U.S. Industrial Chemicals Inc., about ten or 12 years ago. At that time Dr. Sowa had an agreement with USI as a consultant and he supplied it as No. 133 to Ken Earhart for trials with resins and paints. When we obtained part of this sample and screened it as a rodent repellent at Baltimore we obtained some very encouraging results. We got some additional material from Dr. Sowa and I submitted some of it to Dr. Dewitt as a candidate rodent repellent. Dr. Dewitt reported K/values of 86%, 91% and 92% from his tests. He encouraged us to send additional related materials, because he had not previously screened any Boronium compounds, and this one seemed to come from a most promising group.

That’s the end of the letter. This appears to be a draft Walter was working on. I believe effective rodent repellents are still an active problem in pest control research, and I have no idea what became of IB-120. There are a couple of other items in the archive related to Walter’s work at USI and Fairfield Chemical, but I’m not going to post the ones on company letterhead labeled “Inter-Office Correspondence.” It seems unlikely that the company’s successors would really care about keeping this 50-year-old information secret, but I’d rather not test that. Those memos – and the rest of these letters – will go to Johns Hopkins University’s library for storage with Walter’s other work papers once I’ve finished this blog.

Walter applied for a research position with the Public Health Service. On this application form, he answers the “Reason for desiring to change employment” question with “Unsettled conditions due to merger.” 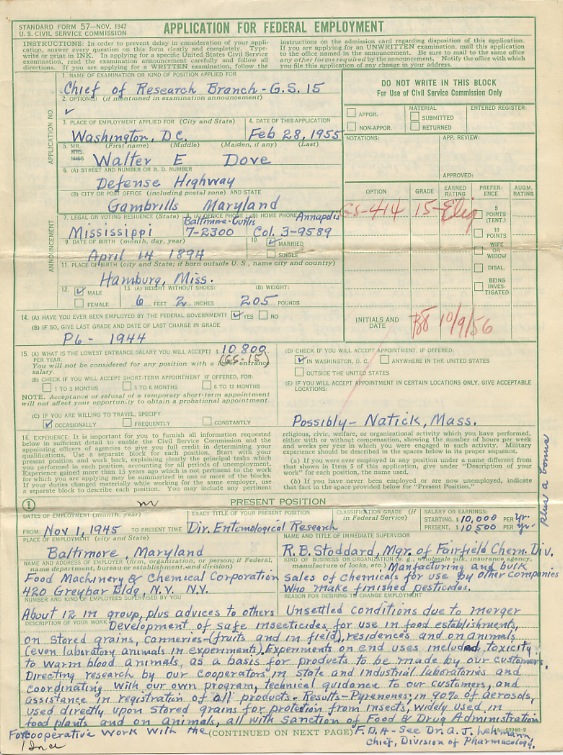 These two photos have no information attached. I believe the man on the left in the first photo is Merritt Sarles, one of Walter’s graduate school classmates at Hopkins and later a co-worker at US Industrial Chemicals. Walter is on the right. The second photo shows Walter standing in front of the USI lab.

It is difficult to find photos of Walter without a cigar. 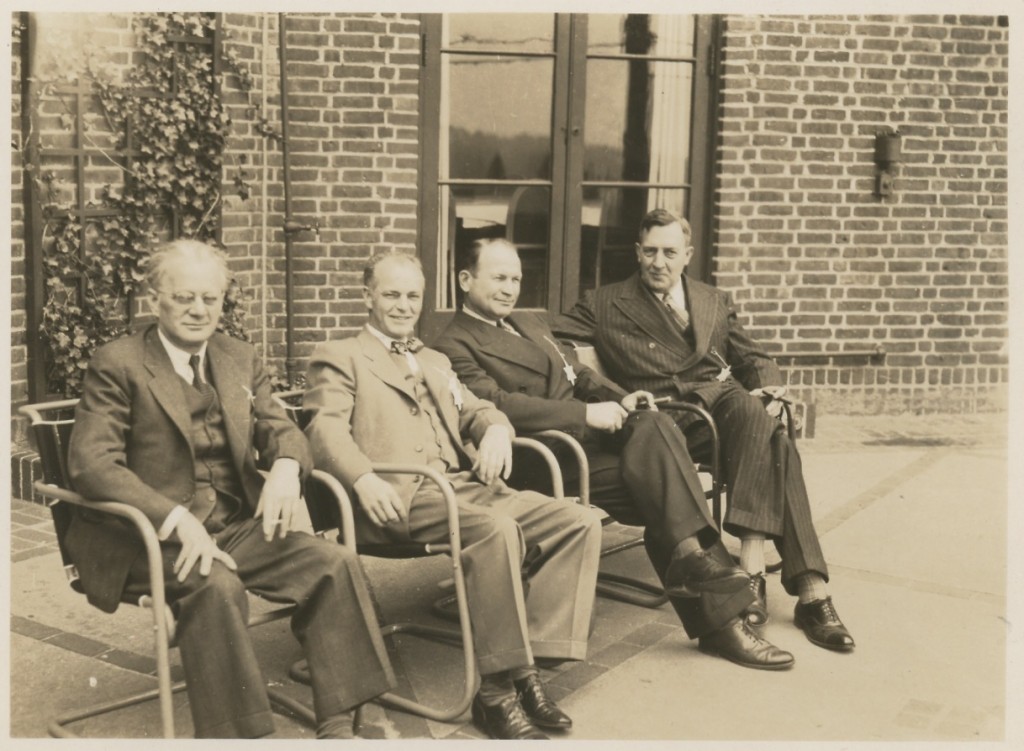 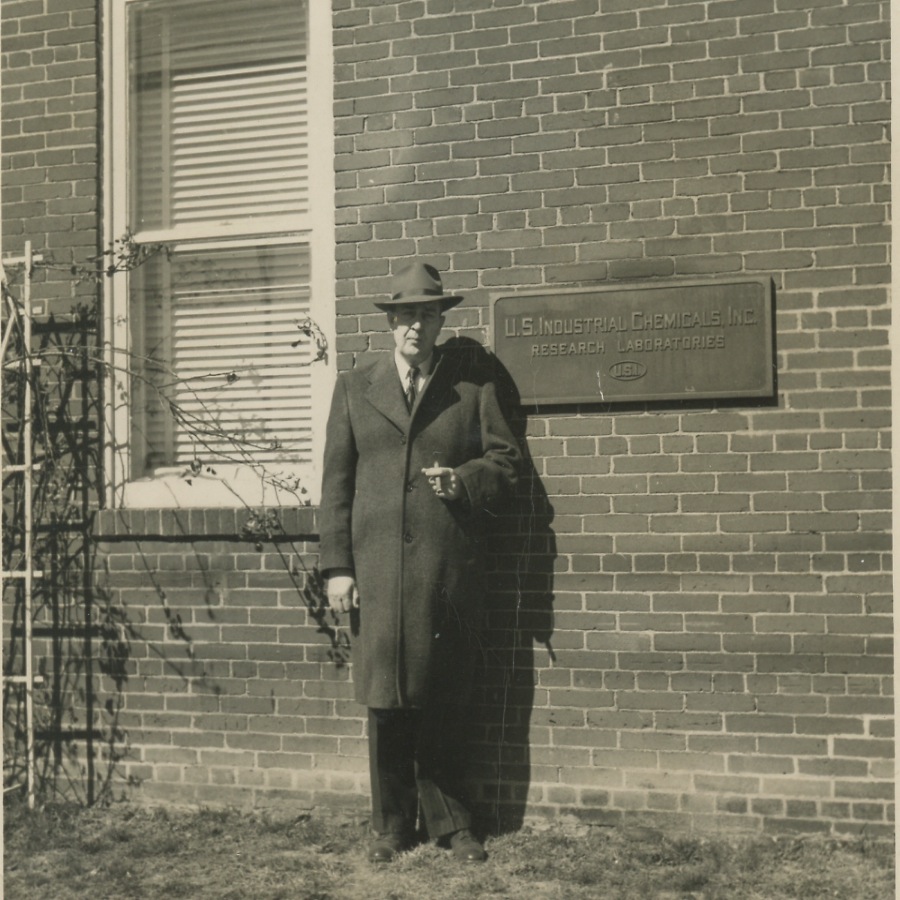 Walter at US Industrial Chemicals, ca. 1950.

This organizational chart shows Walter’s Division in the USDA, just a short time before he quit. As the war started winding down, the Department shifted its focus back to its usual beat, boosting the yields and sales of US-grown crops. They also began looking for peacetime uses of technologies developed during the war, including the amazing new lousicide Walter’s group had worked on. Walter didn’t document his thinking about this, but various family stories and some of his publications hint that he wasn’t at all pleased with the idea of spraying DDT on crops. In one paper from 1945, he described the compound as “definitely toxic,” and argued that it might have harmful effects in the environment when used in large quantities for extended periods of time.

By mid-1946, he had left the Department and taken a job with US Industrial Chemicals in Baltimore, where he began working on improving pyrethrum-based insecticides. 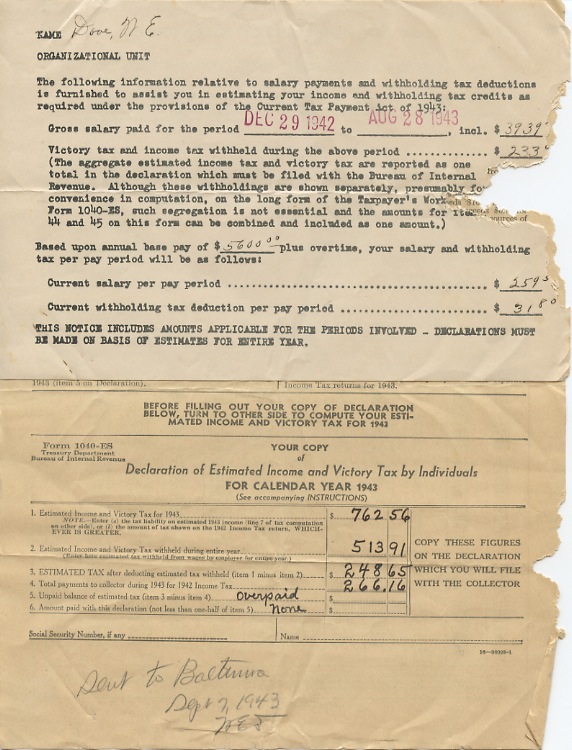 We were so happy to have your card today. Could you write more often? It had seemed such a long time since we had heard. 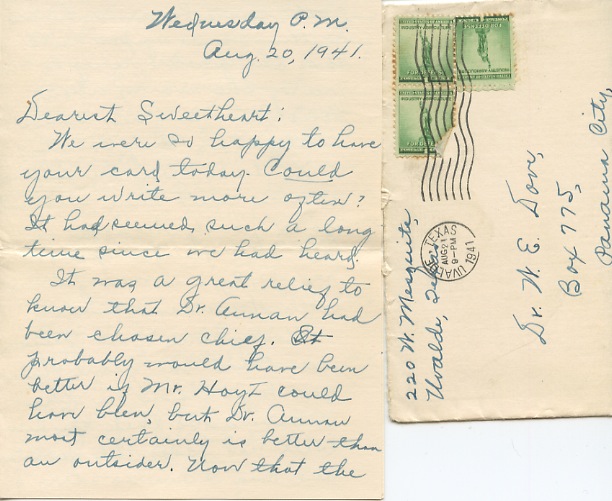 It was a great relief to know that Dr. Arman had been been chosen Chief. It probably would have been better if Mr. Hoyt could have been, but Dr. Arman most certainly is better than an outsider. Now that the chiefship is settled, perhaps the ball will begin rolling again. I’m anxious to know what your assignment will be. I know of only one person who qualifies perfectly for Dr. Arman’s former position. It would be nice if others with more authority than I would see it that way, and would act accordingly.

All the boys are fine. W.W. is spending the afternoon at Ina Marie’s. L.D. had his whooping cough shot Saturday. Dr. Fielder used the serum that we brought. Tommy is a little cross because he is cutting some upper teeth. It is the greatest relief to be free of the worry about polio. Have any new cases developed in Bay County?

No doubt you are having a nice, quiet time without your family. We hope you are eating and sleeping regularly, and are feeling well. We miss you lots.

Honey, will you please see that the front shades are kept down in the mornings so that the sun will not fade the furniture and rug? I am so sorry I forgot to give you the key before we left you. No doubt you have received it by now.

Regards to the people at the lab and their families.

I’m sorry that the control project is so slow in going though.

“Associate Chief” is a new position created in the bureau, is it not? That certainly places Mr. Hoyt next to the chief.

Lots of love & best wishes from your family.

Ina is visiting her family in Uvalde, TX with the three boys, while Walter stays back in Panama City, FL.

Thanks very much for the nice letter. No word on the control p. yet. Tides have helped some on Santa Rosa sound, but have not given complete control. 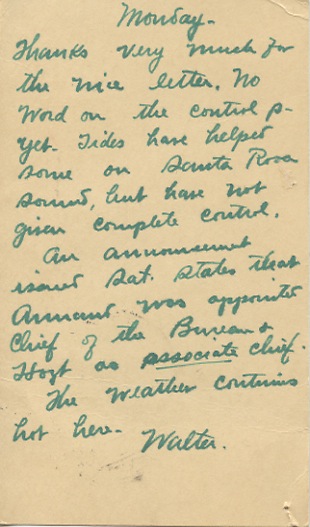 An announcement issued Sat. states that Annand was appointed Chief of the Bureau & Hoyt as Associate Chief.

It is hard to say which was the more surprise, your letter or the announcement of the arrival of your third son. To say the least both came as a surprise. 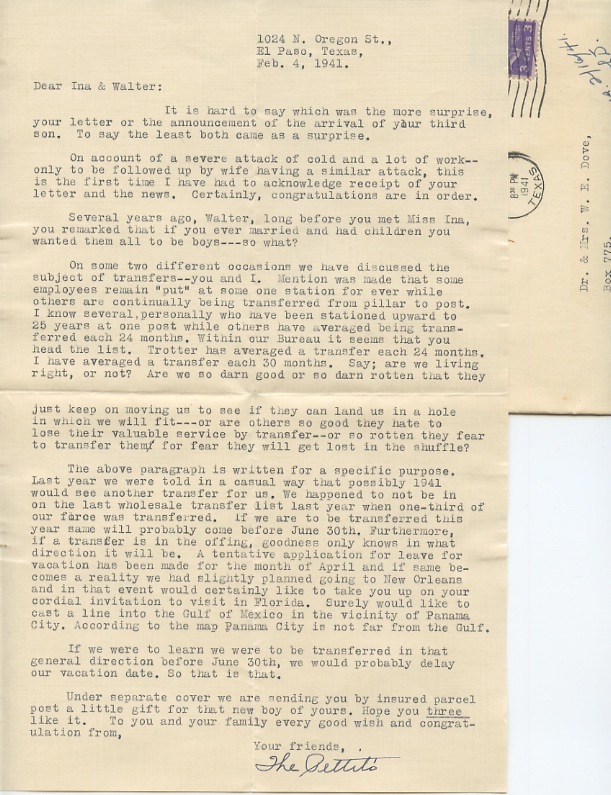 On account of a severe attack of cold and a lot of work — only to be followed up by wife having a similar attack, this is the first time I have had to acknowledge receipt of your letter and the news. Certainly, congratulations are in order.

Several years ago, Walter, long before you met Miss Ina, you remarked that if you ever married and had children you want them all to be boys — so what?

On some two different occasions we have discussed the subject of transfers — you and I. Mention was made that some employees remain “put” at some one station for ever while others are continually being transferred from pillar to post. I know several, personally who have been stationed upward to 25 years at one post while others have averaged being transferred each 24 months. Within our Bureau it seems that you head the list. Trotter has averaged a transfer each 24 months. I have averaged a transfer each 30 months. Say; are we living right, or not? Are we so darn good or so darn rotten that they just keep on moving us to see if they can land us in a hole in which we will fit — or are others so good they hate to lose their valuable service by transfer — or so rotten they fear to transfer them for fear they will get lost in the shuffle?

The above paragraph is written for a specific purpose. Last year we were told in a casual way that possibly 1941 would see another transfer for us. We happened to not be in on the last wholesale transfer list last year when one-third of our force was transferred. If we are to be transferred this year same will probably come before June 30th. Furthermore, if a transfer is in the offing, goodness only knows in what direction it will be. A tentative application for leave for vacation has been made for the month of April and if same becomes a reality we had slightly planned going to New Orleans and in that event would certainly like to take you up on your cordial invitation to visit in Florida. Surely you would like to cast a line into the Gulf of Mexico in the vicinity of Panama City. According to the map Panama City is not far from the Gulf.

If we were to learn we were to be transferred in that general direction before June 30th, we would probably delay our vacation date. So that is that.

Under separate cover we are sending you by insured parcel post a little gift for that new boy of yours. Hope you three like it. To you and your family every good wish and contratulations from,