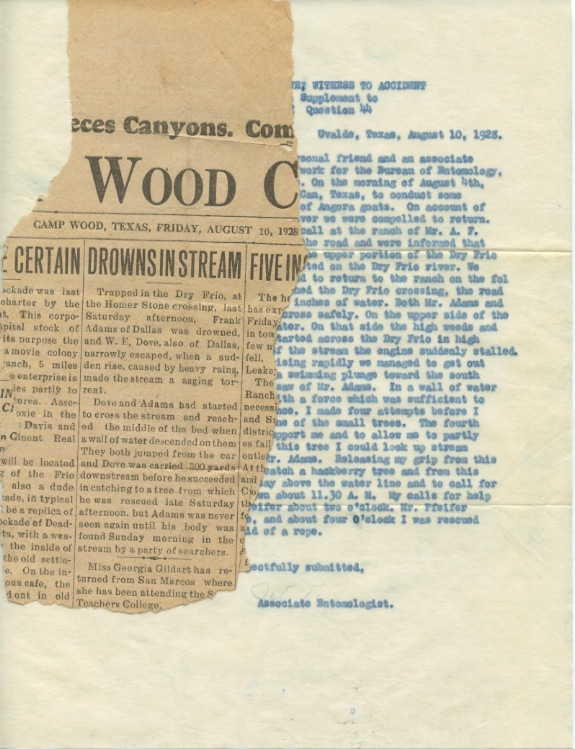 Mr. Frank Adams was a personal friend and an associate of the undersigned in research work for the Bureau of Entomology, U.S. Department of Agriculture. On the morning of August 4th, Mr. Adams and I started to Con Can, Texas to conduct some experimental work on parasites of Angora goats. On account of the flood waters of the Frio river we were compelled to return. On our way back we intended to call at the ranch of Mr. A.F. Dismuke. We met Mr. Dismuke on the road and were informed that heavy rains had fallen also in the upper portion of the Dry Frio river. We were advised to go to Uvalde and to return to the ranch on the following Monday. When we reached the Dry Frio crossing, the road contained about six to twelve inches of water. Both Mr. Adams and I felt that we could drive across safely. On the upper side of the road we could not see any water. On that side the high weeds and brush appeared normal. We started across the Dry Frio in high gear, but near the center of the stream the engine suddenly stalled. Even though the water was rising rapidly we managed to get out of the car. Mr. Adams made a swimming plunge toward the south side. This was the last I saw of Mr. Adams. In a wall of water I was carried down stream with a force which was sufficient to break down a barbed wire fence. I made four attempts before I could catch to the top of one of the small trees. The fourth one was stable enough to support me and to allow me to partly overcome exhaustion. From this tree I could look up the stream but could see nothing of Mr. Adams. Releasing my grip from this small tree I was able to catch a hackberry tree and from this position I was able to stay above the water line and to call for help. The water came down about 11.30 A.M. My calls for help were answered by Mr. Pfeifer about two o’clock. Mr. Pfeifer secured aid from Uvalde, and about four o’clock I was rescued from the tree by the aid of a rope.