The meeting with the Committee turned out quite satisfactory and I feel confident that we will not have more resolutions from them. We worked on individuals ahead of time and Tuesday an open meeting seemed to get things in line. We are stressing the demonstrations and screened hospital pens and the other portion of the program centers about this approach.* 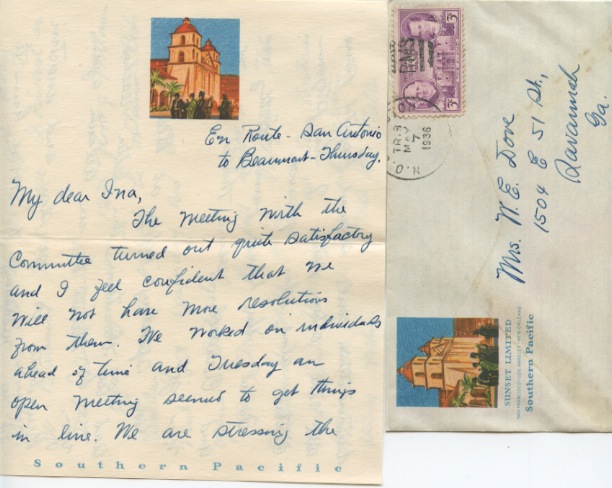 Am spending today at Beaumont and by the time this letter reaches you, I should be in Atlanta again. Brundrett is so slow and inactive it is necessary to move him to California. That is my job today at Beaumont. Will use Doward as state Superintendent.

Office space on 12th floor of Milam building will probably be obtained. Bids went out yesterday and are to be opened Saturday.

* Apparently there was some kind of local resistance to the USDA’s screw-worm control program.

Will visit Mr. Parman this AM & go over some of his work. Tomorrow we meet the Committee at Del Rio. Will be San Antonio Wednesday and hope to leave about Wednesday night for Atlanta and home. Folks seem well. Thelma Lee & Reitha are young ladies now and pretty too. Ina Marie seems to be well behaved. Telegraphed Frank last night. He and R.A. are to get started in California as soon as they can get started. 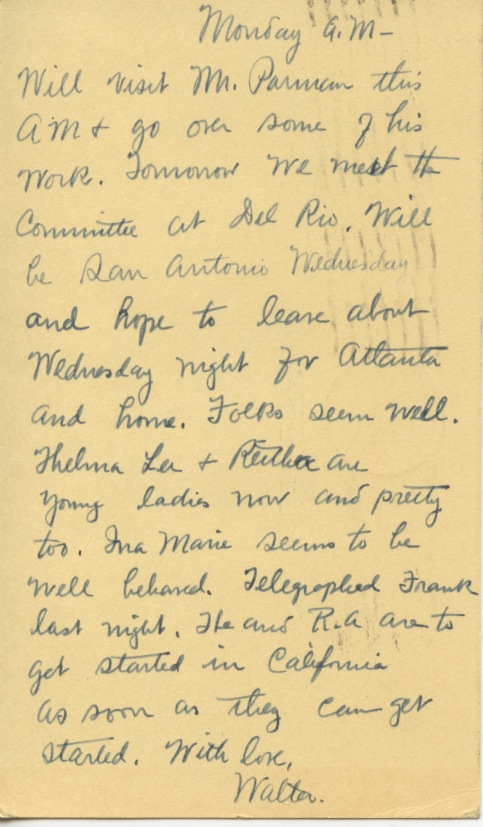 Mr. Spicer and I are driving from College Station to Uvalde. It is now 10:30 PM. Meetings at College Station were very good and the difficult one is at Del Rio 10 AM Tuesday. Things are gradually getting in line for the program. Drove from Beaumont to College with Brundrett & Doward. More later.

Arrived at 7 and had breakfast with the Brundretts. Will drive to College Station with B. & Doward today.

Mr. Townsend was doing OK but still in hospital Wash. DC when I left Atlanta. 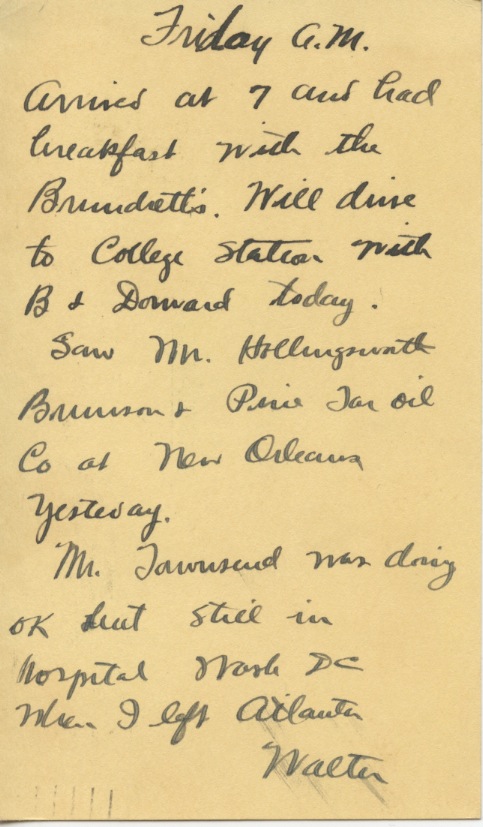 A big rush during the past day or two or rather since March 9th. Left Bruce in Atlanta and he will be there until Friday PM & then again for duty next week. McGehee takes over Fla. work next Monday and Bruce Atlanta about Wednesday. Mr. Townsend is in hospital at Wash. following eye operation but 2 days after he was sitting up and listening to a radio. Rice, Cushing and Spencer went over to see him. Expect him to return about Sunday. Sent out his bids and purchase orders all this PM and I think the rush items were taken care of OK. Pay rolls were signed & C. has a check for a few days. Mr. Mitchell is sending my checks to you 1504 E. 51. One is for $40 for 16 to 20th. The other is for 21 to 30th. Please deposit both of htem. I cashed one check for $10 Monday & another for $40 this noon. When I returned to the office the advance of funds for 200 was there. Hope I did not over draw your account but in case I did the other checks will be there Friday AM. Swore to the lien & returned it to Mr. Cline this noon. He will get it tomorrow morning. 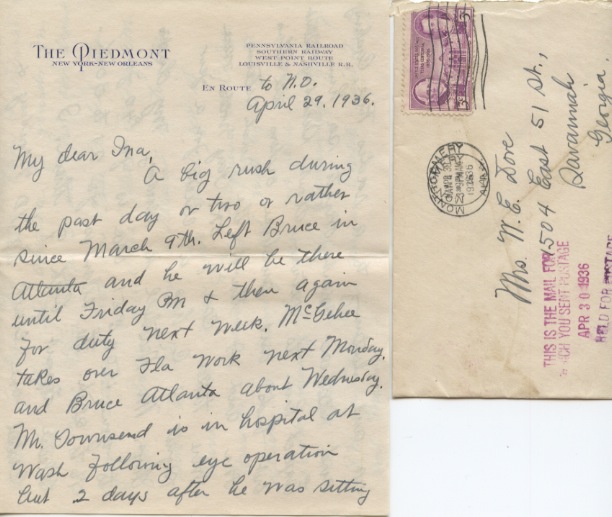 My conference at College Station is Saturday and will try to get to Uvalde Sunday but am not sure. Will see them on this trip. Yeomans left yesterday AM for Texas, RA was in Uvalde last Sunday and Monday.

I am enclosing a note from Dr. Huff. I dictated letters to both he and Dr. White this PM and I asked the Huffs to stop at Savannah too.

With lots of love to the three of you,

San Antonio next Monday care of Mr. McDonald, Bureau of Ent & P.Q. Will establish an address at San Antonio for mail then.

Yesterday afternoon Mr. Rainwater stayed with me and worked and about four o’clock Mrs. Rainwater came by the office. She typed some things for me which I had overlooked during the rush of the past few days and they were mailed into Washington. A report for the Pest survey bulletin and a news release on screw worms. They had lunch with me at the cafeteria and I went to a movie with them. I took a bath (Sat. night) and went to bed. This morning I found that the Day Light Saving had gone into effect so I’ve been an hour late. Ate breakfast late and a late dinner. Worked from about 11 to 3, saw a parade & then worked from 4:30 to 8:40. Made out my accounts for March and April so that Mitchell can type them tomorrow. I do not get expenses at Atlanta. With the visiting period on the Cushings my accounts amount to $99. 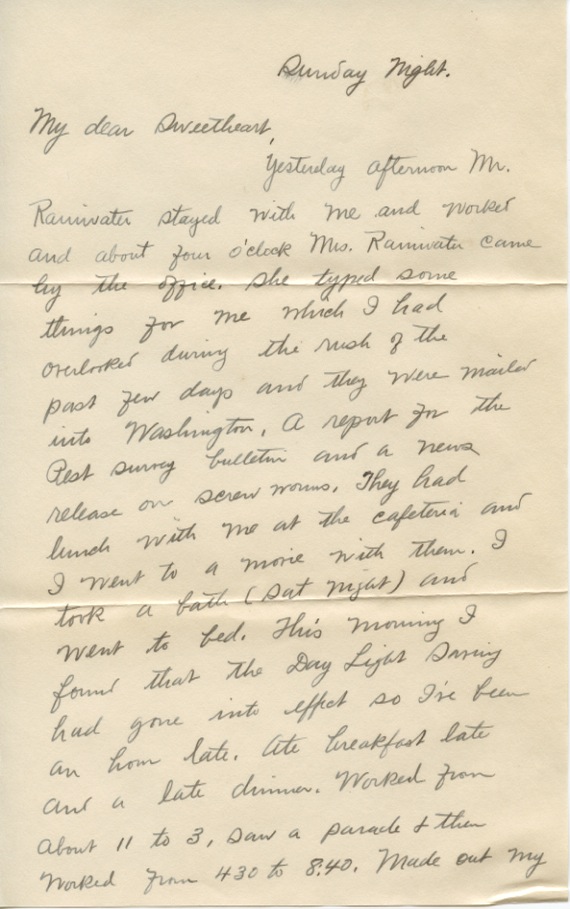 Tomorrow morning Mr. Yeomans reports and after brief instructions during tomorrow and Tuesday he will leave some time Tuesday for San Antonio. Mr. Welker reports tomorrow morning & Bruce comes in the PM. Miss. Claudelle Lewis reported to the Lab at Uvalde on Saturday AM & I sent her an Oath of Office by Air Mail. Had an Air Mail letter from her and I think she has plenty to do.

Mr. Townsend had an operation or expected to, so he will probably be in Washington all week. He has been a hard worker and I’ve depended on him for the office end. On account of payrolls I may not get away as early as I had thought. They have to be signed and only Townsend and I can sign them.

I will have to draw a check on our account tomorrow. I have 40¢ for breakfast tomorrow morning. Made application for an advance for $200 and it should be here by this time. I’ll draw about $10 and by the time it is used, the other should be here. Will get express money orders for convenience.

With lots of love to you and all of our sons,

C&S paper received & will be notarized tomorrow. Am due College Station Saturday and will not leave here until Wednesday PM. Yeomans checked out today. Bruce is here now.

Claudelle’s appointment was approved today and I telegraphed her this PM. Am planning to see Uvalde on Sunday May 3d. Sending material to her today. She reports for duty at Uvalde.

Will try to meet Dr. White at Savannah Saturday of this week. 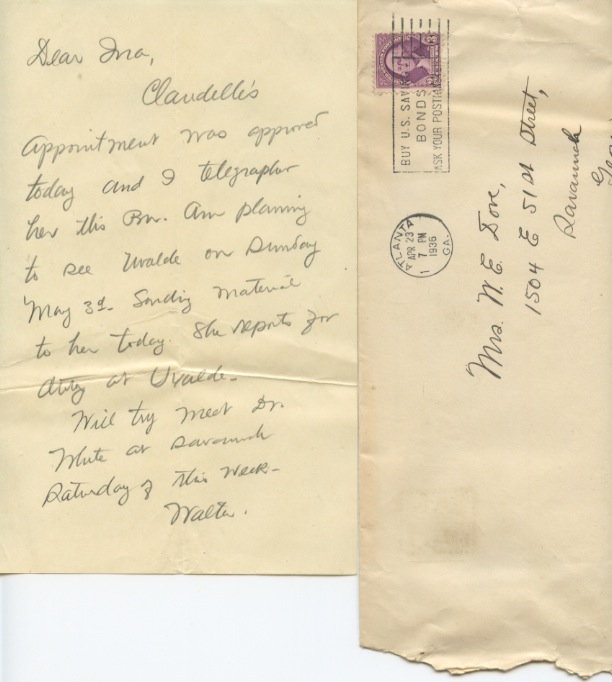 Mailing check to bank tomorrow for deposit & they will mail slip to you. Expect to be home Saturday & will probably drive down. Had a good trip to Wash. & things are lining up pretty good. 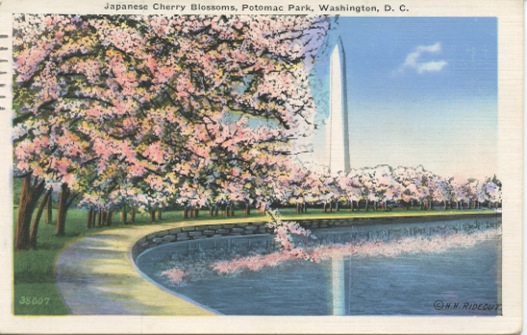 I am enclosing some mail I thought you would be interested in.

Your wife and sons have not forgotten your birthday. When you come home there will be a small gift for you. We might even sing “Happy Birthday to You.” 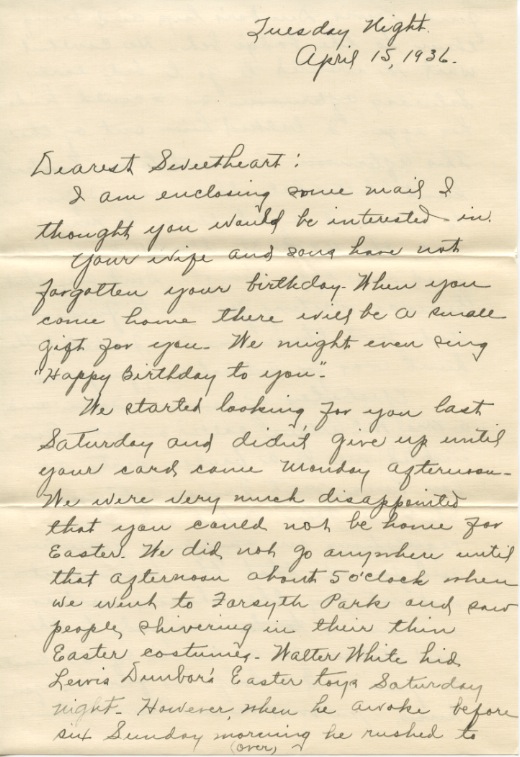 We started looking for you last Saturday and didn’t give up until your card came Monday afternoon. We were very much disappointed that you could not be home for Easter. We did not go anywhere until that afternoon about 5 o’clock when we went to Forsyth Park and saw people shivering in their thin Easter costumes. Walter White hid Lewis Dunbar’s Easter toys Saturday night. However, when he awoke before six Sunday morning he rushed to find Lewis Dunbar’s toys and bring them to the baby’s bed. He couldn’t wait. He wanted to go to bed early Saturday afternoon so I could hide his eggs. I talked him out of that. This afternoon he went to an Easter hunt (better late than never!) given to a crowd of children by Mr. Orsini and the 49th St. druggist. He didn’t find any eggs though. Don’t say that he was waiting for me to find them and put them in his pockets! The hunt was for advertising purposes.

Yesterday afternoon Sara and a Mrs. McArthur called on us. Sara invited me to a bridge party at her house next Friday afternoon. She said John looked up the regulations on shipping furniture and found that the government will not pay the charges unless a man is assigned to the new station for a period of at least a year and a half. So far as you know, you will be in San Antonio only one year. What shall we do?

I haven’t listed our house with a real estate agent yet, hoping that you would come home some time so we could decide which one we want to handle it. If we can’t ship our furniture we should keep a house to put it in, shouldn’t we ? I telephoned Mr. Rowland after receiving your card and he said there would be a charge of $15.00 for drawing up the papers if he renewed the loan and, since Mrs. Adams is ill in a hospital in Richmond, Va., he would have no authority to lower the rate of interest. I then called the Citizens & Southern. I have explained their terms to you. It looks as if we would not only save about $10.00 by giving them the loan but would have the privilege of paying it up at any time we wish, getting credits for the interest we would have paid had we allowed it to run longer. I asked about that because I thought we might sell to someone that would want to place the loan elsewhere at perhaps a lower rate of interest. Mr. Kline (I believe that is his name), of the Citizens & Southern, said that our arrangement with them would not interfere with a sale in any way whatsoever except, of course, anyone assuming the notes would have to be acceptable to the bank. He said he would get in touch with Mr. Rowland, and I telephoned Mr. Rowland to that effect. Mr. Kline said he would call me when he was ready for me to come down town; he was sure the transaction could not be completed in a day but Mr. R. could continue to hold the loan until it was completed.

Walter White is snoring so loudly – just like his mother! I’m sleepy too.

We love you lots, Honey, and hope to see you soon.

With a lot of help from Mr. Townsend I am leaving this noon with figures for Washington. Do not expect to be there more than one or two days but of course one can never tell how long. Mr. Townsend will send my check to Box 22. I drew a check yesterday $25. On renewal of house suggest you phone Mr. Rowland and ask what charges would be. If more, it would be cheaper at 7% & I think we should keep with him one year. If there is renewal expense the C&S for 3 years is OK. 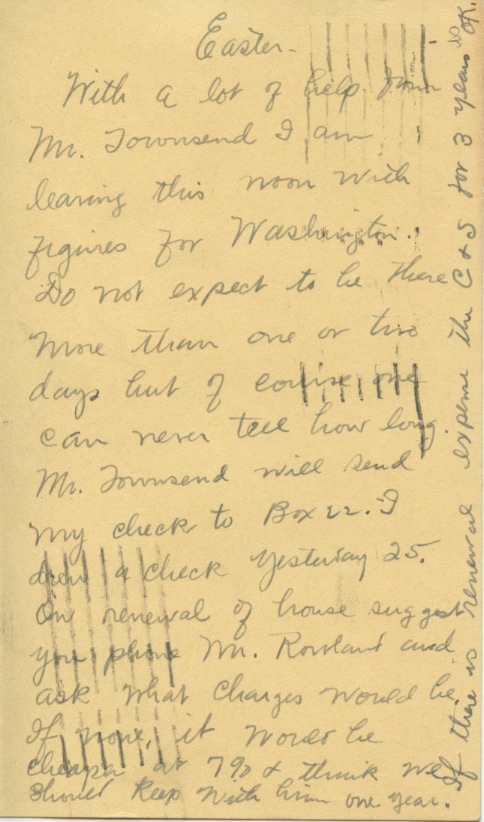