Will leave here at 215 on the Blue Bonnet (MKT). Had a good session Chicago and the 1st booklet is finished for the printer. It is going to help me keep track of C. americana this year. About 1/2 million copies already ordered by dairy firms. I telephoned Mrs. Fox (nee Susette Fowler) of our class 13 A&M. Had a nice visit. She talks like an old lady. Mr. Fox knows Marshall and said Marshall looked after some business matter for him at Philadelphia. 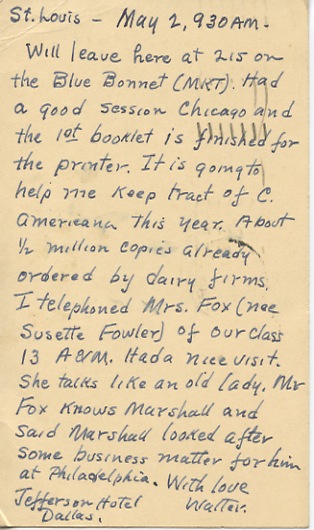 I’m not going to transcribe this lengthy exchange verbatim, but it’s an interesting discussion. Walter received a letter from George Decker, with whom he’d worked on grasshopper control in the 1930s. Decker is now working on chinch bugs in the midwest, and has heard rumors that the USDA is desperately seeking entomologists with field experience for the war effort. He asks Walter if he should offer his services. Walter writes back to describe the Army’s current recruiting efforts for science officers, and to point out that those working on domestic crop production are already considered critical to the war effort and therefore unlikely to be allowed to transfer. 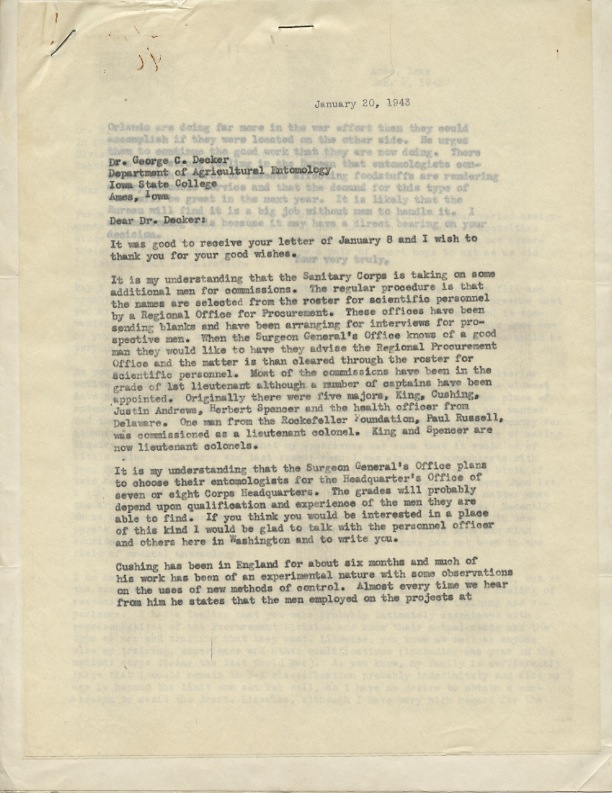 By the time this reaches you it will be Valentine’s Day and I’ll have to get the candy when I come home, because I did not get it today. For the past 3 days I have had some luck in getting material. Two lots have been sent to Mr. Bushand at Orlando so that he can breed up a supply for tests. I have some other material tonight and if I get some more tomorrow I’ll send it down by Air Express tomorrow night. It arrives there about noon of the following day. For the tests I am getting some material now but it is not enough. It looks like we will have to rear it and ship it here for the fumigation tests. 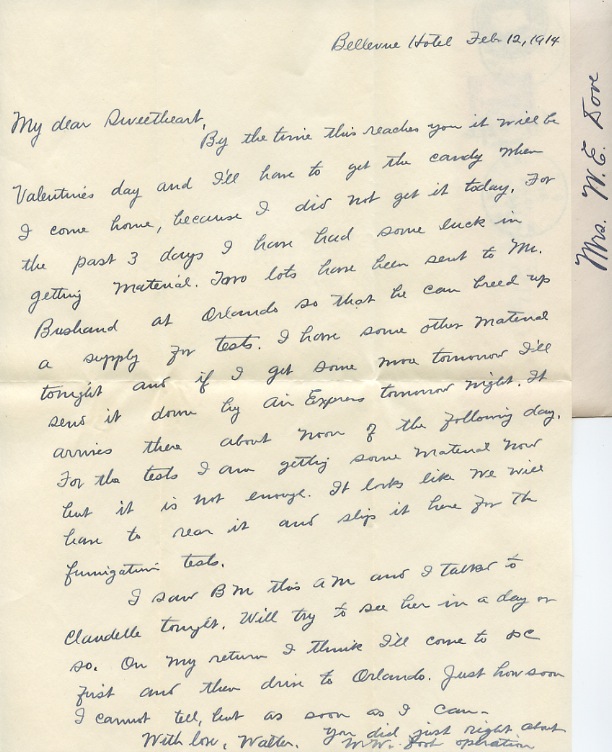 I saw BM this AM and I talked to Claudelle tonight. Will try to see her in a day or so. On my return I think I’ll come to DC first and then drive to Orlando. Just how soon I cannot tell, but as soon as I can.

You did just right about WW foot operation.

These photos show state-of-the-art insect control in late 1941. Walter and his USDA colleagues had discovered that the dog flies (Stomoxys calcitrans) infesting the Panama City, FL area bred in decaying organic matter along the area’s beaches. To get rid of the flies, the team loaded barges with oil and creosote, then mixed the two petroleum products and sprayed them on the beaches and marsh grasses all along the shore. This sounds completely horrifying by modern environmental standards – the resulting oil slick must have extended for miles – but these were the tools available at the time.

Your letter was a real good one and I was more than pleased that our boys are on their best behavior. I hope that they will keep up the standard they have already set, and that all of them including Tommy will not give any trouble to Mother and Daddy Lewis. 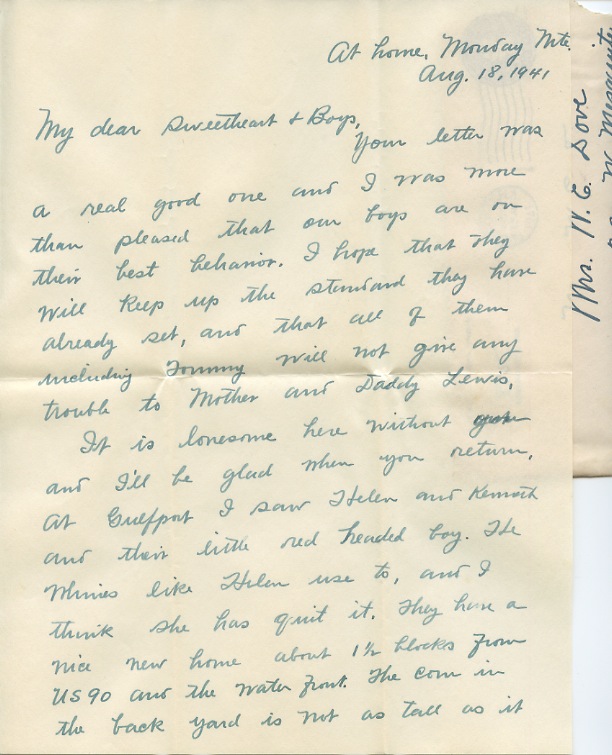 It is lonesome here without you and I’ll be glad when you return. At Gulfport I saw Helen and Kenneth and their little red headed boy. He whines like Helen used to, and I think she has quit it. They have a nice new home about 1 1/2 blocks from US 90 and the water front. The corn in the back yard is not as tall as it was in Minneapolis, but there is a larger lawn of fast growing grass to mow. Helen put a little package in my coat pocket for you, Ina, and at home I find that it is some sort of Verbena soap. I opened it to see if it was fruit cake which might spoil before you come home. You might care to send her a card. I had to promise that we would stop there on the return trip. I did not leave Gulfport until about 8:30 PM, after Kenneth and I had dinner down town, so that I did not get home until about 3:30 Tuesday morning. I had a good visit with the White FB men and learned something. Dr. Dickison was expecting his family soon. R.A. was in a very good mood and will be there two or three weeks.

As yet there has been no word on the control program. I am expecting it at any time, but am inclined to believe that the papers showed up on the desks of some disinterested parties. Mr. Wylie of the USPHS has been here a few days going over the problem. Apparently with a view of making recommendations for a PHS project by WPA. A high tide on Santa Rosa Sound gave a good degree of natural control, and it seems that there has been quite a delay in the season this year.

Saturday PM I washed 2 lots of soiled clothes and dried them. Sunday I ironed them, on the ironer, including 10 shirts and 3 pairs of trousers. Sunday night I drove to the Old Dutch Tavern for a steak. It was fair and I met Mr. Bergdorf who had a collection of heads and skins from Alaska. I found that he had spent about the same amount of time up there as you and I. He went north from Fairbanks to Point Barrow. I drove back by Panama City Beach and listened to Mr. Weir toot his trumpet. He isn’t as good as Walter White thinks he is.

That quart of milk each day makes me think that I am cheating some calf out of something. It is more than I need.

Have a good time and be good.

Walter is starting up a program to control dog flies in the Panama City coastal area. The flies breed along the shoreline, which is why an unusually high tide killed off a batch of them. Apparently there are some administrative snags holding up the program.

It was a little late when I came home last night and Dr. White was asleep. I gave the letter from Atlantic Beach to a trainman (flagman) and he promised to post it in Jax, so if that one seems to come thru a little quicker that probably accounts for it.

This afternoon the little boy across the street, Betha Hill, 14, and I went hunting. He has been helping me trap since I have been down here, but works every week day with his father (a plumber), so we had to plan the hunting on Sat PM when he was not working. His father went with us in their Ford, and we drove about twelve miles south, to what is known as Palm Valley. There were palms in the valley and palmettos too, but there was no town. The roads were very narrow and crooked. We did not find anything to shoot, but killed the afternoon and had a good time. It was the first time I had been south of the beach here and I was interested in the country. We had quite a little experience in coming back, as we found a high tide and with about five miles driving on it. We were either driving in soft sand or in the water. It wasn’t funny, as there was a northeastern wind beginning which carried the water pretty high. At one time it got into the carburetor and killed the engine. It was getting rougher all the time and we felt fortunate that we got off the beach when we did. It is blowing pretty hard now and I have been told that the “North Easternsers” usually continue for 3, 6 or 9 days at about the same speed. Since it is over I am glad that I have had the experience on the beach during a high tide as I will be cautious when you are with me. It is hardly possible that a person could drown as the water is not deep, but it would be disagreeable to experience. Besides, you might get your “Sunday dress” wet with salt water. (Remember what Thelma Lee said about my “good pants” when you and I were caught in the rain). 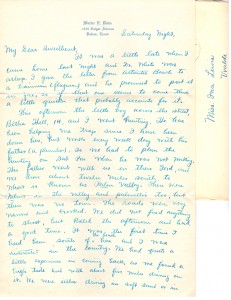 The day has passed rather quickly, but I miss your letter. The post office had closed when we got back tonight so I have it to look forward to for tomorrow. Wish I could see you instead. I’d hug you so hard. I certainly do love you, Sweetheart, and I hope we will always feel the same as we do now.

I had a mighty nice letter from a Mr. Roy Watson of Caxambas a few days ago. He had written to Dr. Howard and his letter had been given to Mr. Bishopp. I wrote to him to find out the nature of his trouble and he came back with a long letter. What is known as “sand flies” which are small biting gnats are of considerable annoyance on the southwest coast. I am planning to spend at least two weeks with him when I go down the state. I would prefer to work on these, before you are with me in Florida, as I do not care to be located where they are going to bite you and I. You can bet that I am thinking of you, and I want to be able to locate where we will not be troubled in that way.

I love you, Honey, and I want you. With a sweet goodnight, I am,

On returning from the Great War, Walter resumed his previous job with the US Department of Agriculture’s Bureau of Entomology. His salary was $1,800 per year, which is equal to $22,913 in today’s dollars. As before, his work consisted of investigating various insect problems in the Southwest and developing solutions for them. He continued to correspond with some of his old Army buddies, but otherwise focused entirely on his work. 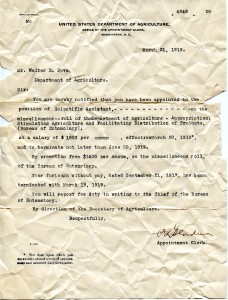 Meanwhile, Ina finished an Associate’s degree at a local college, paying her way with a Spanish language scholarship. She then took a job in the tax collector’s office in Uvalde, TX, a small town west of San Antonio. She was a popular young lady, and by the age of twenty-five she had rejected twelve marriage proposals.