World War I was also a formative experience for Ina, who followed the news and worried about friends and relatives who were “over there.” Her cousin, Clyde Lewis, was one of them.

Your letters dated August 31st was received several days ago and was so glad to hear from my cousins once more.

Glad to know that you sometimes think of me, even tho’ it has been several years since we saw each other. My thoughts so often travel back to the days of long ago, when I was quite young and you were only small girls. Time does sure pass by swiftly after we pass childhood days. I can hardly realize that you both are charming young ladies. 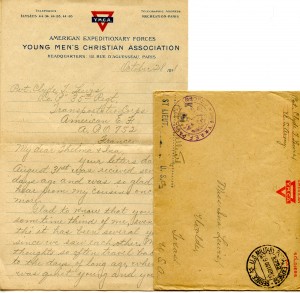 My day’s work is over and I can say that I am a little tired. We are doing our bit, tho’ we are far from the firing lines. We are working in the railroad shop and after ten hours of labor for six days a week, it makes one think that he is surely doing his bit. I sometimes wish that I was with the boys at the front, but I suppose that I am among the lucky to be in the sunny part of France. We have about the same climate here as we have at home.

We are to have moving pictures tonight, providing that the Y.M.C.A. man gets the moving picture machine. We have “movies” one or two nights a week and it is a very good pass time.

Well you would hardly believe me when I tell you that I have stayed in the barracks that Napoleon and his army built and stayed in. So you see that this is a little bit of history within itself. Don’t you think so? Everything is built of stone, so it is nothing to see buildings that have stood for centuries. We are in one of the largest cities in France and the latest building was erected in 1912. The Frenchmen claim that this country is not so far behind times – that the U.S. is only one hundred years ahead of times and I believe this to be true.

I received a letter from Mamma last week. The first one that I received from home for two or three weeks. I sure enjoy a letter from home and to know that they are all well. Sister had just been home on a few days’ visit. I will sure be glad when I can spend a few days at home again as it has been one year since I saw any of them.

Yes, I will be one of the many of the boys that return to the old U.S.A. a single man. Tho’ I have the greatest of confidence in the girls back home, I feel sure that I will live a bachelor’s life, for life must be started over. I can assure you that if I ever marry, it will be to some sweet American girl.

I am sorry that I have no pictures of myself. I have thought for the past month that I would have some made, but I have failed to do so. I will sure have some made sometime very soon and send you one. I will expect your pictures in your next letter.

Well, the moving picture machine failed to show up, so I guess that I had better close and go to bed.

Lots of love to Uncle Nick, Aunt Alma and Claudel and to yourselves.