Your letter of recent date was received yesterday and as usual found me in the best of health.

Owing to the rules of the censors there are lots of things of which I cannot write, and if you have noticed my letters have always been written in such a manner that if they were intercepted nothing of military importance could be learned. We are obliged to refrain from writing anything which would give a spy a clue as to the location or movement of troops and supplies. 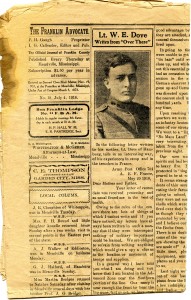 In a general way I have told you what I am doing and you know that I am located in the Advanced Zone near the Southern portion of the line. Our camp is near enough the front to hear the big guns, but as yet we have not been shelled or bombed. The only attacks that we could expect would be from the German planes, and for defense against these we are pretty well fixed.

Our planes are in excellent condition. We are doing some cooperative instruction with American artillery, and we have little fear of the (Bosch) German planes.

As you know, I trained in the infantry in the States and was transferred to the Aviation Section as a ground officer, which was due to the fact that there was a shortage of ground officers for this branch of the service. By doing this I was sent “over here” much sooner, and I am very glad that I made the change. Not because I dislike infantry, for such is not the case. I am still very much interested in infantry operations, and at times I feel that I could be doing more in that service.

Yesterday, in company with some of our pilots and Aerial Observers we visited the front lines and had an occasion to see some real activity. We witnessed at least six attacks on aircraft by anti-aircraft guns, some of which were our planes being attacked by the Germans. A late type of German bombing plane was brought down behind our lines by our men, but our planes returned safely. The clouds are used to good advantage by planes when they are attacked, as they easily conceal themselves when they are fired upon.

In going to the trenches we were unable to get gas masks and “tin hats” until we were pretty close up, and while we were without this essential paraphernalia we had an occasion to cross an open section in the automobile. A German observation balloon had just gone up and German artillery fire was directed upon our road, but the nearest shell missed us by two hundred yards. We did not lose any time.

Upon reaching battalion headquarters we were accompanied by an infantry lieutenant, who visited some of our strong points with us. We went to a “listening post” in “No Man’s Land” which we found very interesting. It had been taken from the Germans on the previous night.

Our men were in excellent spirits and had become accustomed to heavy fire. They were well protected in “dug outs” and appeared to be at ease. It seems strange but the residents of this section were cultivating their farms, children were going to school, and apparently they were not concerned with the shells which were constantly being fired over their heads. They felt as though they were sufficiently protected by our men on the line, and I believe our men will prevent the Bosch from doing anything. There is no doubt as to the outcome of the war, as “our boys are showing the stuff that men are made of.” All we want is a little time, plenty of artillery, equipment, ammunition, and air planes, and you can leave the rest to us.

Last night we took the planes out of the hangar, borrowed a piano from the Red Cross, found a few violin players in the “Flight,” and had a real entertainment. Had a few Mississippi Negroes to dance for us, but as I expected, our hypnotist could not hypnotize them. A couple of the Y.M.C.A. ladies came down and seemed to enjoy the little show.

Our men are rapidly building our repair shop and soon we will have it equipped for repairs on aero motors, plane repairs, trucks, small clock like instruments, vulcanizing, and any other thing that needs repair.

With love to all and assurances that everything is going well, I am,