The children were so happy to have the letters from you. They will answer them soon. Those compliments on their good behavior work like magic. Really, I’ve never known them to behave so well for so long before. I think a great deal of it is due to the fact that they both feel so well and they have plenty of room to play. 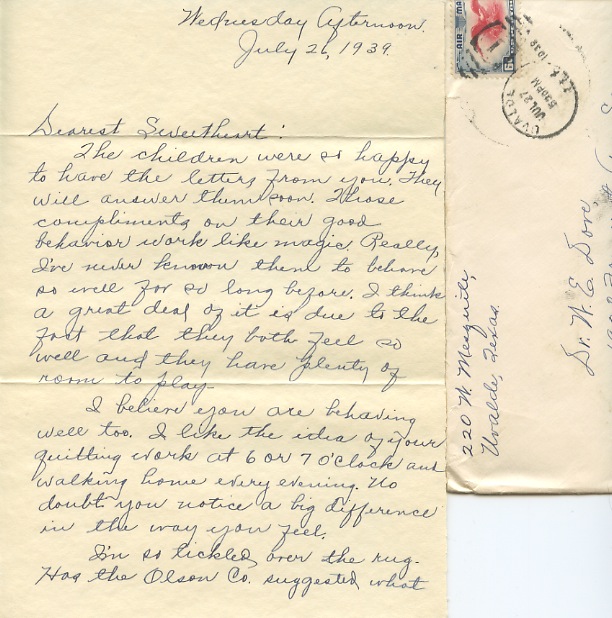 I believe you are behaving well too. I like the idea of your quitting work at 6 or 7 o’clock and walking home every evening. No doubt you notice a big difference in the way you feel.

I’m so tickled over the rug. Has the Olson Co. suggested what adjustment might be made? It would suit me to get another one exactly like the one in Reitha’s room – color and all; we know it’s all right. Perhaps we can wait until after we return to order it.

It is well that you are looking around for a place to live. Before we decide on one I wish we could know whether or not we shall be in Minneapolis for another year. It would be too bad to go to the expense of moving, and then have to leave town in a month or two, wouldn’t it? If we knew positively we were to be there only a month or two longer we could stand the dirty walls and even the neighbors for that short time. However, if we are going to remain in Minneapolis for a year, let us move by all means.

Mama is feeling very badly now. Her favorite sister, Aunt Ophelia Brumfield – the one you met in Jackson – is being buried there this afternoon. She must have passed away very suddenly, because Mama had a letter from her this morning which she wrote Sunday; she was feeling fine then. Mama and Papa enjoyed her so much when they visited her in Mississippi recently. It gave us a strange feeling to have the letter from her today after we had already received the telegram telling of her death. The shock of the message yesterday affected Mama so deeply that we were worried about her for a while – her arms and legs remained numb for a long time.

Perhaps you don’t like this high-handed way in which we are planning the trip to Mississippi, but I had to admit to Mother Dove that the children and I were hoping we could go after I learned that someone, perhaps you, had written her that we were going. I’m anxious to hear from you about it. I shall not answer the enclosed letter until I hear from you. If you want to go by Ethel’s after we go to Mother Dove’s it suits us fine.

We love you lots, Honey.