These receipts are part of Ina’s effort to sell off the cattle from the Dove family farm in Mississippi, which she and Walter had inherited. Ina later gave the land to her three sons, who finished switching the property from cattle ranching and mixed farming to tree farming for lumber and paper pulp. It remains a sustainable tree farm; proceeds from it have helped put three generations of Doves through college. 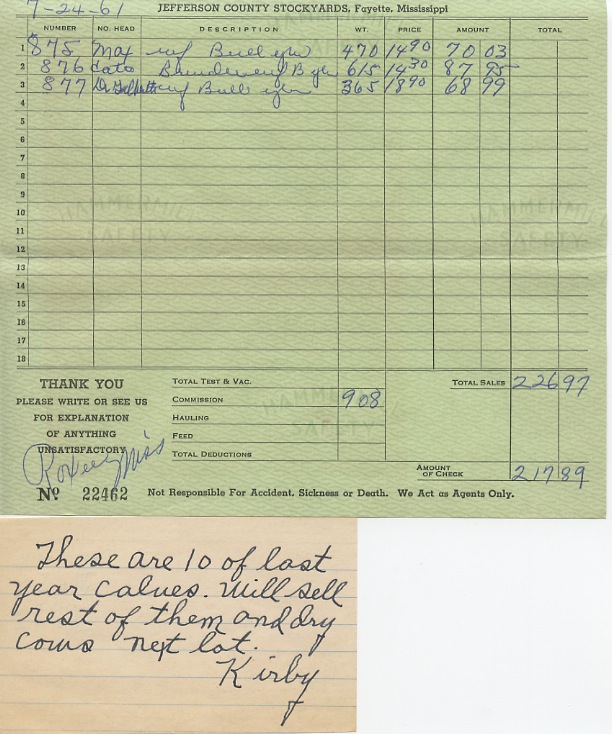 I came here last night and will probably be here until some time tomorrow when I will go down the state. Expect to go about as far as there is any land. Will spend a few days at Palm Beach and at the National Park south of there.

I stopped here because we had two severe cases of creeping eruption which originated here at exactly the same spot. Plumbers were installing a furnace in a new building and at one place both became heavily infected with creeping eruption. It has been about three weeks and at this time there should be a development in the soil which would be visible to the naked eye, and of such a stage that it could be determined. The peculiar part of the origin of infestations is that there is no particular reason from a sanitary point of view, and the places would never be suspected unless one was familiar with the origin of the disease. 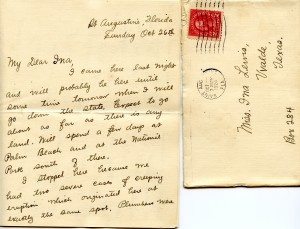 I’ll probably be down the state for about a week or 10 days and when I return to Jax I’ll probably be there only a few days before I go to Washington. Will have to make a preliminary report so that Dr. Kirby-Smith can use it at the Southern Med. Meeting in New Orleans. It will not be complete, but a more complete report will be made at the Am. Med. Assn. in New York next June. Dr. K.S. will show the slides and discuss my report at New Orleans. It is barely possible that I’ll be there but I hardly think so as I’ll probably go to Dallas as soon as I have completed my work at Washington. I do not expect to be in Wash. any longer than is necessary for I don’t particularly like it there. So many do like it but not for me. I expect to work hard during the hours, which are short and to take enough library material out to keep me busy during the evenings.

I am sending some material to Dallas and I’ll still have something to do when I arrive there. There are several details which I would like to work out before next June. If possible I want to keep away from any co-operative work with the Public Health Service for I now feel that I have found bottom by myself and would like to solve the rest of it.

Lots of tourists coming to Florida now. One could count 40 to 50 cars per hour on a road leading to Jacksonville. Most of them go further south on both coasts. Sarasota on the West Coast is destined to become another Miami. Real estate is booming, but not ranch or farm property. The farmers own very little land, and won’t allow any body to fence theirs. Cattle run at large and anyone building a fence is apt to have it cut into pieces. The cattle are scrubs and worth very little. The markets handle a great deal of Western beef as the Florida cattle are so tough one can hardly eat it. Northern people have tried to fence large ranches and bring in pure bred cattle but the fences are always cut and if guards are put on them, some one shoots them from the bushes.

I am looking forward to Christmas time when I can see you again. It seems like a long time since I left Uvalde. I love you lots and can’t help but believe that you love me at least a little, though you won’t tell me.

Kindest regards to Mother, Father, and Sister and lots of love for yourself.