Born and raised in Franklin County, MS, Walter E. Dove attended the local one-room schoolhouse until the teacher declared that he had taught the boy all he knew. Barely a teenager, Walter became the first in his family to go to college, and in 1913 he graduated from Mississippi A&M. He promptly got a decent job at Armour and Company, a meatpacking operation in North Dakota. After about a year, he switched jobs to become a Scientific Assistant with the US Department of Agriculture. Based in Dallas, he studied agricultural pests throughout the Southwest. 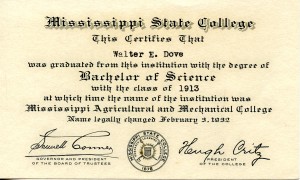 Around the time Walter was moving to Dallas, Archduke Franz Ferdinand was assassinated in Sarajevo, setting in motion a chain of events that would soon change the world, and Walter’s life, forever.