This noon I received your letter of Friday night, and tonight your letters of Wed. and Thurs. came. It was a mighty pleasant surprise to get the two extra ones, for I had thought that possibly you had not managed to get them posted. I am sure that the first two went to Jacksonville, while the last one came direct to the Beach. They were just as sweet as they could be and I wish you knew how much I enjoy them. 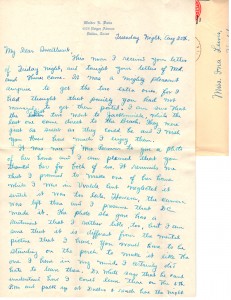 It was nice of Mrs. Parman to give a photo of her home and I am pleased that you thanked her for both of us. It reminds me that I promised to make one of her home while I was in Uvalde but neglected it until it was too late. However, the camera was left there and I presume that DC made it. The photo she gave has a sentiment that I rather like, too, but I am sure that it is different from the mental picture that I have. You would have to be standing on the porch to make it like the one I have in my mind. I certainly did hate to leave there. Dr. White says that he can’t understand how I could leave there on the 5th P.M. and pack up at Dallas & reach here the night of the 9th. I had to hustle, but I wanted to be with you as long as possible. I’ll never forget how excited Mrs. Parman was when we told her that you were leaving with me. Next to you and I, she will be more pleased over our marriage than anyone else. It will be the happiest day of my life, Dear, and I hope and believe that it will be the beginning of a lot of happiness for both of us.

You asked for me to suggest a present for you and you will tell me what you think of my suggestion. I believe it should be something which we would probably not get in the ordinary purchases, but something which you could use very nicely. Rather a luxury than a necessity. I know that you would hesitate to make such a suggestion, but if I get something to please you I’ll have to get an idea of what you want. I have thought something of getting started on a set of solid silver, and then add to it from time to time until a complete set is obtained. This would be of such a nature that I would want you to select the pattern. The same thing comes into my mind if we start on some DeHaviland China or a set of Libby’s cut glass. I want you to have a set of each and perhaps it would be well to start on them with a wedding gift but I believe you should decide on the designs you want. Perhaps this could be done to better advantage when they have been compared and after we are married. Maybe a Lovelier (I guess that’s the way to spell it) would be OK. Something in white gold, possibly of a pendant nature, with a couple or three small diamonds. If you have an idea of what you would like I’d like to know.

I can think of any number of things we would need for the home but I don’t believe this present should be of that nature. It depends upon what you think about it. I think it should be something which would last you a lifetime and on the nature of a luxury. We can’t expect to have everything to start out with, but we can plan on what we want and have the pleasure of getting them. I think that is about the greatest pleasure one can have.

Dear, I’d rather you would not worry about your wardrobe and if you are planning your needs in clothing, I’d plan about the same that you would wear as far south as Uvalde. The winters in Florida are mild, too, and I believe it is a pretty safe bet to say that we will spend the latter part of the winter and spring down here. Just as soon as I know I’ll certainly let you know and I believe you will then have plenty of time to decide on some of the things. You need not try to have so many clothes ready. You see, I have never had a wife and I hardly know about a wife’s clothing etc.

It was real sweet of you to say that you thought it would be nice on the beach this winter. I have wondered how this would strike you. I would much rather go direct to our home and know that we were not stopping at a place temporarily. I rather wish that it were possible to have our Dallas cottage in Florida.

Must say “goodnight” Sweetheart for it is getting late. I love you and with all my heart.