After so long a time I thought I would drop you a line. Probably I am doing the wrong thing in writing a personal letter as there might be some Departmental regulations forbidding a superior writing an inferior or vice versa. 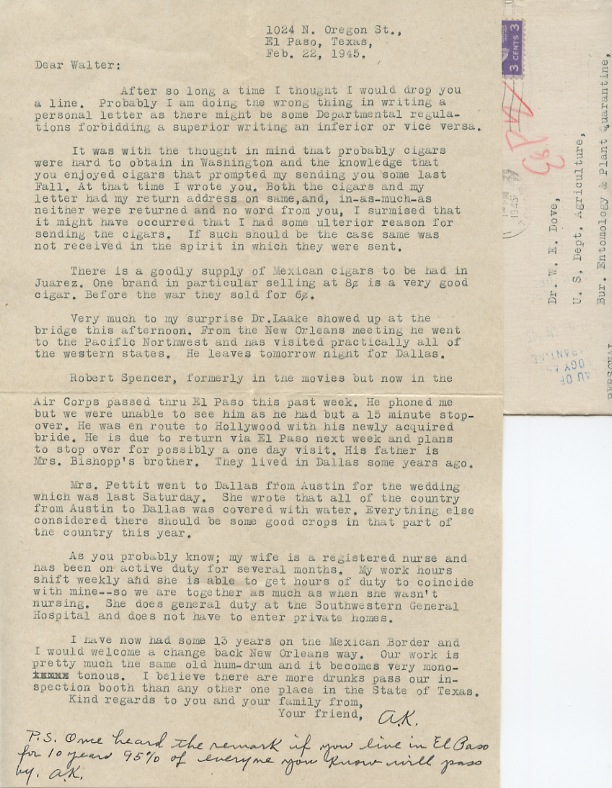 It was with the thought in mind that probably cigars were hard to obtain in Washington and the knowledge that you enjoyed cigars that prompted my sending you some last Fall. At that time I wrote you. Both the cigars and my letter had my return address on same, and, in-as-much as neither were returned and no word from you, I surmised that it might have occurred that I had some ulterior reason for sending the cigars. If such should be the case same was not received in the spirit in which they were sent.

There is a goodly supply of Mexican cigars to be had in Juarez. One brand in particular selling at 8¢ is a very good cigar. Before the war they sold for 6¢.

Very much to my surprise Dr. Laake showed up at the bridge this afternoon. From the New Orleans meeting he went to the Pacific Northwest and has visited practically all of the western states. He leaves tomorrow night for Dallas.

Robert Spencer, formerly in the movies but now in the Air Corps passed through El Paso this past week. He phoned me but we were unable to see him as he had but a 15 minute stopover. He was en route to Hollywood with his newly acquired bride. He is due to return via El Paso next week and plans to stop over for possibly a one day visit. His father is Mrs. Bishopp’s brother. They lived in Dallas some years ago.

As you probably know, my wife is a registered nurse and has been on active duty for several months. My work hours shift weekly and she is able to get hours of duty to coincide with mine — so we are together as much as when she wasn’t nursing. She does general duty at the Southwestern General Hospital and does not have to enter private homes.

I have now had some 13 years on the Mexican Border and I would welcome a change back New Orleans way. Our work is pretty much the same old hum-drum and it becomes very monotonous. I believe there are more drunks pass our inspection booth than any other one place in the state of Texas.

Kind regards to you and your family from