Your letters of Friday and Saturday came yesterday. They were both very interesting.

I agree with Mr. and Mrs. Hall in regard to the amount of work accomplished on the sand fly problem. It seems that you have gone forward with great speed. The fact that it is such a difficult problem and practically no previous work has been done on it makes it all the more remarkable. 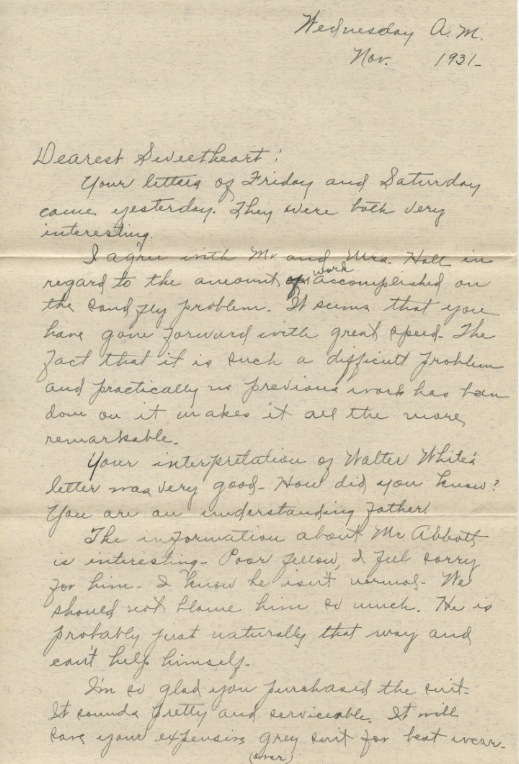 Your interpretation of Walter White’s letter was very good. How did you know? You are an understanding father.

The information about Mr. Abbott is interesting. Poor fellow, I feel sorry for him. I know he isn’t normal. We should not blame him so much. He is probably just naturally that way and can’t help himself.

I’m so glad you purchased the suit. It sounds pretty and serviceable. It will save your expensive gray suit for best wear. You needed one to wear to the lab. That clothing store will be a blessing to the town if the merchandise is as good as it seems. It was mighty sweet of you to think of purchasing one for Papa’s Xmas gift. I told Mama about it and she said they would not let you do such a thing. Papa said the same when she told him. They appreciate it very much, and so do I, but they do not want you to spend that much on his gift. He still has his blue serge suit that he wore in our wedding and it looks like new.

Honey, Papa, Thelma and I together purchased a dress for Mama’s birthday. Her birthday is on the 5th of this month but we have already bought the gift. She appreciates it so much. The dress and hat are sort of a powder blue, and they are very becoming to her. She looks prettier in them than I have seen her in a long time. It was thoughtful of you to mention it. Your name goes in on the dress and hat. Mother Dove has a birthday some day this month but I have forgotten the exact date. Heretofore, we have been celebrating her birthday in October but when she was in Charleston she told me it was November instead. You know better than I what she would prefer as a gift. Will you please send something nice to her?

We have had Ina Marie all day so I did not have an opportunity to finish your letter. Bob’s baby sister, Marguerite, suddenly became dangerously ill at their ranch home last night and they rushed her to Uvalde. She is a tiny thing – not much larger than Thelma Lee – and is very young. She has been married about a year or more. A few months ago she had a miscarriage. She seemed to have recovered until terrific pains struck her last night. They carried her to Thelma & Bob’s, and Dr. Merritt, who has a little hospital here, examined her some then and thoroughly at 9:30 this A.M. He said she was pregnant in the tubes, that there was a laceration there and that she was bleeding to death inside. He advised immediate operation and said she would not live to reach San Antonio if they attempted to carry her there for the operation. By the time her family arrived and the family doctor from Sabinal it was late this evening. They carried her to the Merritt hospital here. There were five doctors present, but I don’t know just how good they are. Thelma phoned after the operation was over and said Marguerite had not yet come out from under the ether but the doctors still had hopes for her. It seemed that after they opened her up (that is a poor way of expressing it but you know what I mean) they found she was not pregnant and that one of her ovaries had to come out. I do not know the particulars but perhaps Mama & Papa will know when they return from Thelma’s. They carried Ina Marie home tonight and I am expecting them any time now. I do hope she recovers. It would be terrible if she didn’t.

I love you, Sweetheart, very very much. I’d love so much to be with you this very minute. You don’t know how much I miss you – you really don’t.